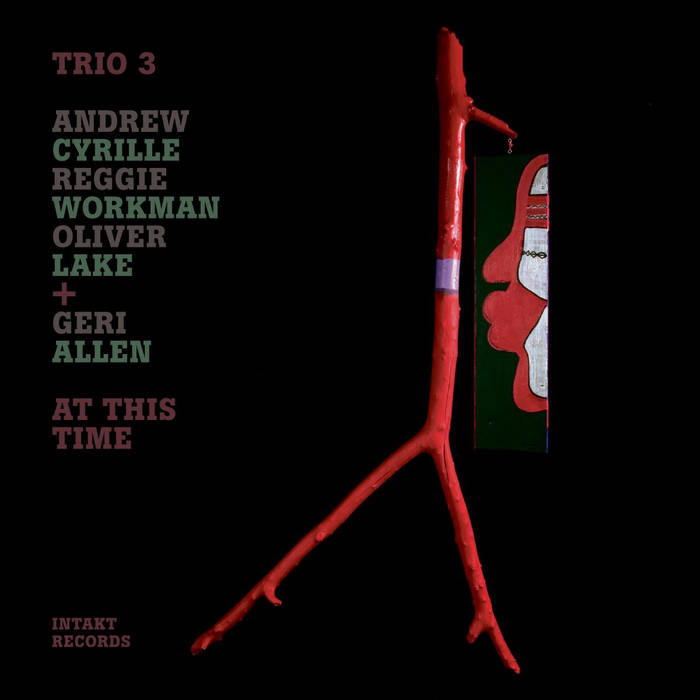 Geri Allen is a natural choice, an already well-established collaborator with each member of Trio 3. Cyrille played on her 1984 debut recording as leader (The Printmakers) as well as more currently with her Mary Lou Williams Collective. Since first moving to New York from Detroit, Allen performed as a member of Lake’s ensembles throughout the ‘80s, from her first ever NYC gig with Lake’s Jump Up to four subsequent recordings under his leadership. Workman featured Allen on his 1995 recording Cerebral Caverns.

Needless to say, there was no need for formal introductions when this dynamic foursome entered the studio fresh off four straight nights performing at Birdland in New York. Admirably Trio 3 has neither given up their very essence or compromised their music or approach in this new chapter of the band, nor is Allen’s presence intrusive to any degree. As a matter of fact, the exact opposite: the four thrive as one under this unique union whose whole is much greater than the sum of its parts.


REVIEW:
The alto saxophonist Oliver Lake, the bassist Reggie Workman and the drummer Andrew Cyrille share an agenda of rugged epiphany. They have pursued that ideal separately over the last four decades, as tireless exponents of the jazz avant-garde. And they have occasionally sought out the same causes together, as a sort of supergroup called Trio 3.
For its brief stand at the Iridium on Thursday and yesterday, that ensemble was rendered numerically incorrect by the addition of a pianist, Geri Allen. (If there was any impulse to adopt temporarily the name Trio 4, no one mentioned it.) The big question was whether the group could fully accommodate another strong voice, without bending in its purpose.
The answer was uncertain during the first couple of songs on Thursday night. “Valley Sketch,” the piece by Mr. Lake that opened the set, felt like a warm-up, as Ms. Allen played vague and tentative chords over a strangely plodding march tempo. Then came a tune with a half-time Latin groove, which still seemed noticeably unsettled.
These issues might have had more to do with basic preparedness than with the presence of Ms. Allen, a member of the first jazz generation to encounter the avant-garde as something other than an insurrection. At 50, she is roughly two decades younger than Mr. Workman and Mr. Cyrille, and roughly a dozen years younger than Mr. Lake: the right age to have absorbed free improvisation as a thread in the canvas of jazz tradition. (It’s no fluke that she is one of the only pianists to have recorded with Ornette Coleman.)
And in any case, it was “Angels,” a brooding theme by Ms. Allen, that snapped the band around. It began as a pianistic rumble, with an attendant rustle of husks and shells. Eventually Mr. Workman set up a syncopated drone, over which Mr. Lake ventured the first of several grippingly intemperate improvisations. Ms. Allen followed with a solo full of flinty jabs, sounding tough enough to invite an unyielding barrage from Mr. Cyrille.
That level of intensity hardly slackened through the rest of the set. On another Latin-flavored piece, Mr. Lake dug into a sequence of mercurial cascades, putting a sharp burr in his tone; when the rhythm shifted into swing for Ms. Allen, she exercised a probing sort of flair. Mr. Workman’s composition “November 1” took the form of an extended tone poem, which occasioned a free-form yet evocatively boppish drum solo.
At times there was no discernable division between Ms. Allen and the established core of Trio 3. And when there was a separation, it felt usefully provocative. The collaboration pushed all parties toward new solutions, and for artists like these, that’s a clear sign of success.
Nate Chinen, THE NEW YORK TIMES, USA, July 17, 2009