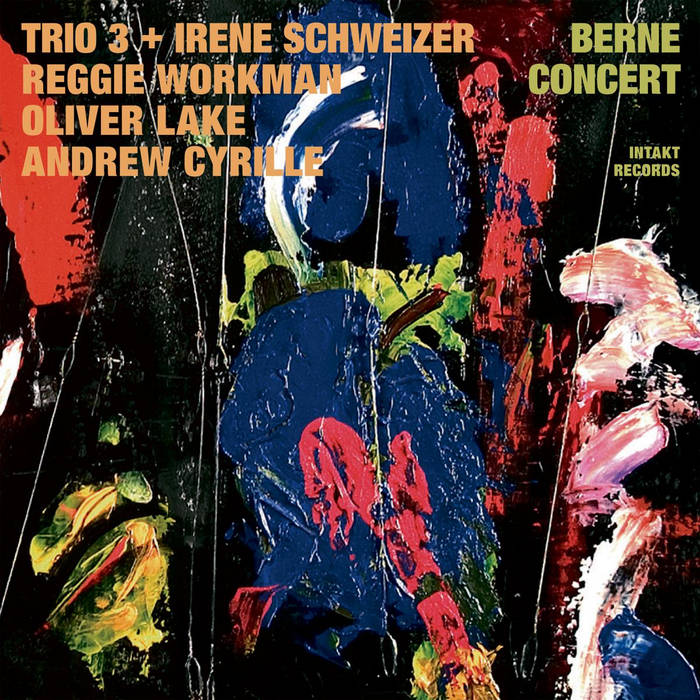 What we get to hear on this album is a transatlantic encounter that casts an up-to-date yet historical light on many relations and cross-links. The African-American jazz community of New York has formed the drummer Andrew Cyrille, the saxophonist Oliver Lake and the bassist Reggie Workman; and they have rewarded this environment with important stimuli – e.g. as peers of artists like John Coltrane, Cecil Taylor, Archie Shepp. – As a pioneer of the European jazz piano, Irène Schweizer is also part of this history. She has already worked with Andrew Cyrille twenty years ago. It is wonderful to hear how relaxed they improvise on this CD. Virtuosity is barely an issue – it is unpretentiously presumed. So this is really about the balance of sound, energy and rhythm, about solos, duos and trios – and quartet formations that allow individual qualities to unfold. It is fascinating how the well-rehearsed trio opens up to the guest to allow the voices to unfurl and to connect. Irène Schweizer’s agility to integrate into the trio is very persuasive, and she delivers enriching ornaments and insertions in the composed pieces in a way one rarely hears.

REVIEWS:
2008 marked the 20th anniversary of both Trio 3’s founding and also Intakt’s duo recording by pianist Irène Schweizer and drummer Andrew Cyrille. This concert in Berne from November 2007 falls just short of a commemoration, but there’s plenty to celebrate. The trio of saxophonist Oliver Lake, bassist Reggie Workman and Cyrille embody free jazz as deeply traditional and insistently lyrical, and the shared focus gives their music a consistent precision. There aren’t many musicians who could collaborate as seamlessly with the three as Schweizer, who belongs to the same traditions, deriving directly from sources like Cecil Taylor and Don Cherry, influences that are apt to be more apparent here than in the milieu of European free improvisation. The program is rigorously democratic. Each member of the trio provides a composition for the quartet, with interludes in which Schweizer joins each member in a duet. It’s all crowned by an intense episode of free improvisation. There’s a certain element of ritual in the performance, but it’s driven by an intense lyricism, each composition a miracle of linear simplicity that develops extended improvisation. Lake is frequently blazing here, singing in a distinct instrumental voice that ranges from coruscating lower register to upper register trills, all knitted together by his sense of song. It’s apparent on his opening “Flow,” but just as evident on Cyrille’s “Aubade,” formed on a characteristically Japanese pentatonic, and Workman’s “Ballad of the Silf.” No bassist is more melodic than Workman, no drummer more articulate than Cyrille, who is consistently tuneful as well as propulsive. Schweizer sounds like she’s always been a member of the band. The three duos are more than pro forma: each quickly finds a high level of exchange and develops from there.
Stuart Broomer, pointofdeparture, USA, April 2009


Almost without anyone noticing, Trio 3 has become one of the great working bands in jazz. That's not the default outcome of longevity: though saxophonist Oliver Lake, bassist Reggie Workman and drummer Andrew Cyrille first got together under the Trio 3 moniker back in 1992, they have become, if anything, a more cohesive unit over time. Their previous release, Time Being (Intakt, 2007), was one of their strongest, with an acute group aesthetic brought to bear on a fertile blend of testing compositions and compelling open improvisations. Berne Concert boasts a similarly fruitful amalgam, with Swiss pianist Irene Schweizer added for good measure.
All three core constituents are giants on their instruments and will probably be familiar to AAJ readers. Workman, of course, recorded with John Coltrane on several landmark sessions in the early 1960s, but has never rested on his laurels, continuing to be adventurous and in-demand as both leader and sideman. Though a ten year tenure with Cecil Taylor is one of the defining attributes in Cyrille's discography, he has lent his percussion wizardry to a veritable Who's Who over his career, performing with artists ranging from Coleman Hawkins, Illinois Jacquet and Mary Lou Williams to Kenny Dorham and many more. Lake has been a founding member of the World Saxophone Quartet since his early days with the St. Louis Black Artists Group, and now holds a preeminent place on the New York scene.
As Trio 3, Lake, Workman and Cyrille have worked with pianists in the past, most notably Geri Allen, but also in a quartet with Marilyn Crispell prior to the group's inception, so it is no surprise that they are readily able to absorb Schweizer into their collective embrace. What is more of a surprise is how naturally she fits in, sounding completely integrated into their soundworld. Nowhere is this more apparent than in the opening "Flow," where an exhilarating four-way dash is rendered all the more potent by her sometimes contrary, sometimes complementary contrapuntal lines, pinballing around Lake's sour-sweet alto. Fittingly as a veteran free improvisor, Schweizer features in extemporized duets with all three members, alongside compositions from each, and one collective improvisation in the hour-long program.
Cyrille's "Aubade" amply demonstrates the quartet's listening skills and the high quality group interaction which results. Everyone wields equal weight in an extended, spaciously lyrical exploration, where flurries of sound hang in delicious suspension, until they finally come together in a glorious theme statement. Other high points are the quick-witted duet "Phrases" where Lake and Schweizer morph from sanctified to rumbustuous to thunderous to puckish in just over five minutes; and the supercharged encore "WSLC" with Cyrille's polyrhythmic tumble, Schweizer essaying contrapuntal lines in each hand and Workman's grainy arco scrapes corralling Lake's pinched squeals and vocalized split tones. Trio 3 is sure to find new fans with Berne Concert: not a single track on this outstanding disc is less than stellar.
John Sharpe, www.allaboutjazz.com, USA, April 20 2009

From the very first few notes you know you are in for something great on the Trio 3 & Schweizer concert CD. The absolute confidence and command of Oliver Lake strikes you first, then Schweizer, then Cyrille, and finally Reggie Workman. These are people who have played freely for years and know what they want to do, seemingly every minute of their time on the bandstand. “Flow” begins with a supremely commanding Lake on alto who says much in his three minutes or so of solo time. Irene responds with a sharply contoured set of piano improvisations. There’s variety, variation in velocity and attack, and attention to timbral niceties that show some amazing sensibilities. This is Free music with set melodic contours for the most part and in no way does it sound ad hoc. Reggie sets the table in just a few seconds on “R.I. Exchange” before Schweizer comes in and they unravel a smart discourse. There are duets and group pieces and not a moment of dead air.
Grego Applegate Edwards, Cadence, USA, Oct-Nov-Dec 2009