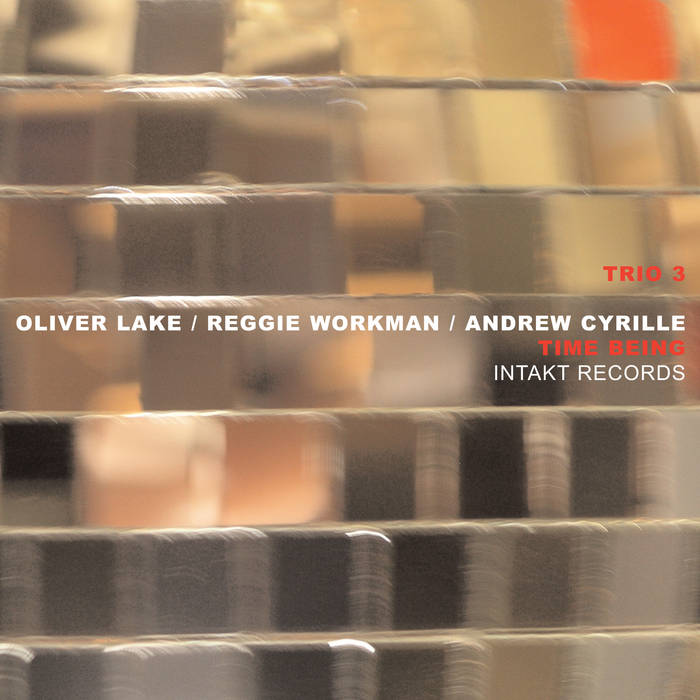 «Time being what it is, there are several ways to approach Time Being, the latest and, I think, best of the Trio 3 albums – among them, its miscellaneous approaches to time, ranging from meterless meditation to swing to stately waltzing; and the collective experience of the group’s membership, a figure exceeding 130 years, for the time being. This cumulative experience involves the assimilation of every kind of jazz, from pre-bop mainstream to the furthest reaches of the avant-garde to sundry precincts on the world music front.

To me, this is the most successful Trio 3 album because it supersedes its predecessors in achieving genuine tripartite equality. Time Being is true trio music: Hardly a moment passes when the listener isn’t aware of the musicians listening to each other.

Reggie Workman, born in Philadelphia in 1937, has always been regarded as a bass player’s bass player. After proving himself in the house band in a hometown club, he moved east with Gigi Gryce’s group, Blakey, Miles, Monk, Lateef, Shepp, McLean, Roach, Murray, and on and on – he’s worked with everyone. I remember the first time I heard him (side one of John Coltrane, Live at the Village Vanguard) and the first time he stopped me in my tracks: the alto saxophone and bass duet on “Lost in the Stars,” from Gary Bartz’s Another Earth – I shouted, “Who is that?” One of his longest-running asso-ciations has been with Andrew Cyrille, a rare New York musician who was actually born in New York, in 1939.

Andrew Cyrille studied at Juilliard and Hartnett (where he met Cecil Taylor and briefly played with him in 1958), then apprenticed with the full panoply of jazz musicians, from abiding legends (Hawkins, Mary Lou Williams) to daring newcomers, including Bill Barron and Roland Kirk. In 1964, he began an historic 11-year association with Taylor, es-tablishing himself as one of the most instinctively musical and inventive drummers of the era. I had the pleasure of producing a few Taylor events as an undergraduate in 1968, and a highlight was Andrew’s solo workshop, tracing the history of jazz percussion – a presentation he expanded in his remarkable video, Jazz Methodology in Drum Music (In & Out of Meter). In 1975, he organized Maono, one of the great ensembles of its time.

Oliver Lake, born in Marianna, Arkansas, in 1942, grew up in St. Louis, where he taught public school and played rhythm and blues before becoming a member of Black Artists Group. In the early ‘70s, he came to New York with a self-produced album on his own, still active label, Passin’ Thru. Along with Julius Hemphill (with whom he recorded the memorable Buster Bee), Anthony Braxton, and Arthur Blythe, he breathed a new life into the alto saxophone, and immediately became a central figure in the Loft Era, joining with Hemphill, David Murray, and Hamiett Bluiett to form the World Saxophone Quar-tet. He created the theatrical piece The Life Dance of Is, led simultaneous bands that ex-plored the legacies of Eric Dolphy and reggae (Jump Up), and worked as a prolific side-man, as on Reggie’s Trio Transition, in 1988, leading to Trio 3.»

REVIEWS:
Three vastly experienced heroes of American free-jazz recorded in New York last year. Oliver Lake is a founding member of the celebrated World Saxophone Quartet, bassist Reggie Workman a former John Coltrane partner, and Andrew Cyrille one of the few drummers able to sustain a long-term relationship with piano hurricane Cecil Taylor. It's an open, African-American free-jazz album, using a refined shared language for such activities that dates back to the 1960s. But if Lake's alto and sopranino saxes are hurtling into deep space, and Workman and Cyrille maintain a flexible pulse by the most convoluted means, the music is none the less full of engaging vamps, hooks and anthem-like melodies, and is recorded with such clarity that the most fleeting detail gains weight.
There's an unexpected playfulness to Lope, a folk-dance urgency turning into stop-time improv and then fast blowing against Workman's dark strummings on Given, and dazzling contrapuntal improv from all three on Special People.
John Fordham, The Guardian, London, 16 June 2006


The respective musicians who comprise this band have been the recipients of world-wide praise for several decades. Therefore, the artists’ repute cannot be undermined. Leave it to the pros so to speak, as this studio set communicates that notion in flying colors.
The trio morphs fractured, stop/start motifs with staggered pulses and soaring crescendos. Everyone is a distinct soloist here, but it’s unadulterated group-based effort, indeed. With Oliver Lake’s gutsy, fluid and dynamically oriented choruses, the rhythm section pursues changeable patterns. Moreover, the trio’s torrid deconstruction processes, underscored by medium-tempo free-bop vamps and rapid-fire ostinatos add to the multidimensional aspects of its chemistry. On “”Equilateral,” bassist Reggie Workman’s arco passages provide an austere contrast to Lake’s vocal-like sax phrasings, as the band subsequently hauls matters into overdrive. Then with the piece titled “Special People,” Lake and Workman engage in flowing harmonic contrasts, while drummer Andrew Cyrille mimics his band-mates’ lines with a push/pull mode of attack. In sum, this is a superfine effort, highlighting the artists’s rather industrious methodology, firmed up by their extraordinarily intuitive improvisational maneuvers.
Glenn Astarita, eJazzNew, USA, July 2006